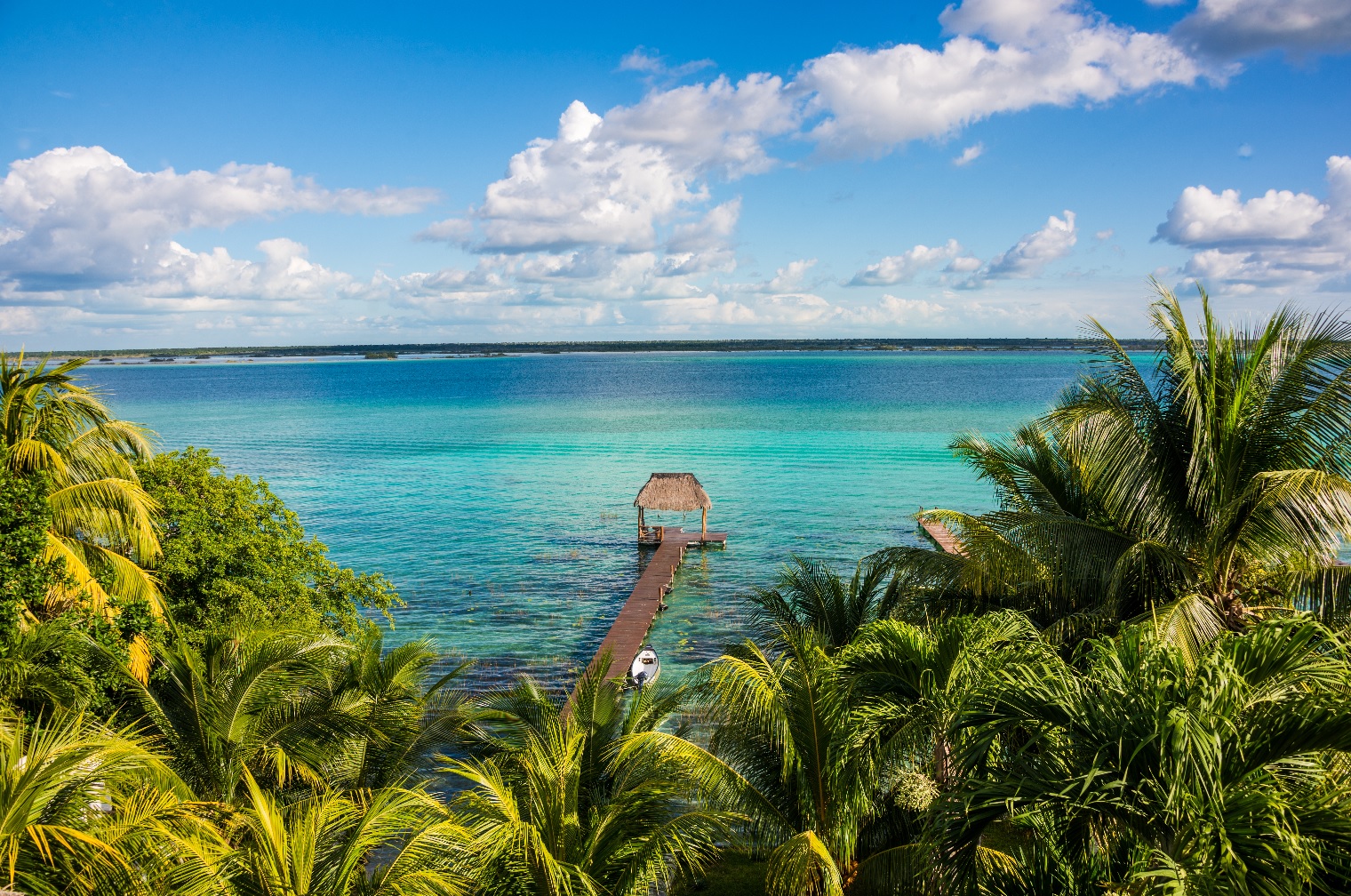 The lake of Bacalar is known as the ‘lake of seven colors’ because of its ever changing tones which range from sandy white to hues of green and blue. This variety of color occurs due to a combination of factors: the crystalline water, the soft color on the bottom of the lagoon, the sun’s rays, and the undulating depth which doesn’t exceed 20 feet.

The crystalline lake spreads out into the distance almost giving the impression that you are looking out of the Caribbean Sea. Lush jungle mangroves surround areas of the lake and the Southern side of the water boasts extensive fossil formations that can be explored. Natural beauty at its best, Bacalar is a Mexican treasure.

Since Bacalar is slightly off the tourist track and does not have a beach it has remained a very economic destination in Quintana Roo. Despite the incredible beauty of the lake, and the natural wonders all around, it is still possible to find very nice accommodation at reasonable prices. There are also many restaurants serving good quality food at regular prices, making Bacalar a great option for those who want their cash to go further.

Bacalar also retains a more traditional Mexican feel than many other destinations in the region. More popular with national tourists than foreigners, it is a great place to come if you are interested in local culture and traditions. If you visit during the first two weeks of August you will be lucky enough to enjoy the Festival of San Joaquin de Bacalar, which sees the streets come alive with dances, parades, games and cultural events.

Quintana Roo is an extremely popular state for tourism and some areas like Cancun, Tulum and Playa del Carmen can get very busy. Bacalar, in contrast, remains relatively quiet and in low season you may be lucky enough to wander along parts of the lake without seeing too many other people. The hotels that sit just beyond the main town also offer a tranquil setting, allowing guests to truly relax and unwind.

Like we said, set on Mexico’s second largest freshwater lake, it is no surprise that water-sports are popular and abundant here. Glide across the multi-hued water in a kayak, zip above it on a jet ski, take out a sailboat or go fishing on this lake that is so large it almost looks like the ocean.

Finally, Bacalar is conveniently located for exploring the local archeological zones and cenotes nearby, many of which are less well known in the region. Just like Bacalar, these sites are quieter than others in the state and you could very possibly be exploring them alone without any crowds.

You may also be interested in Top 5 things to do in the Riviera Maya.