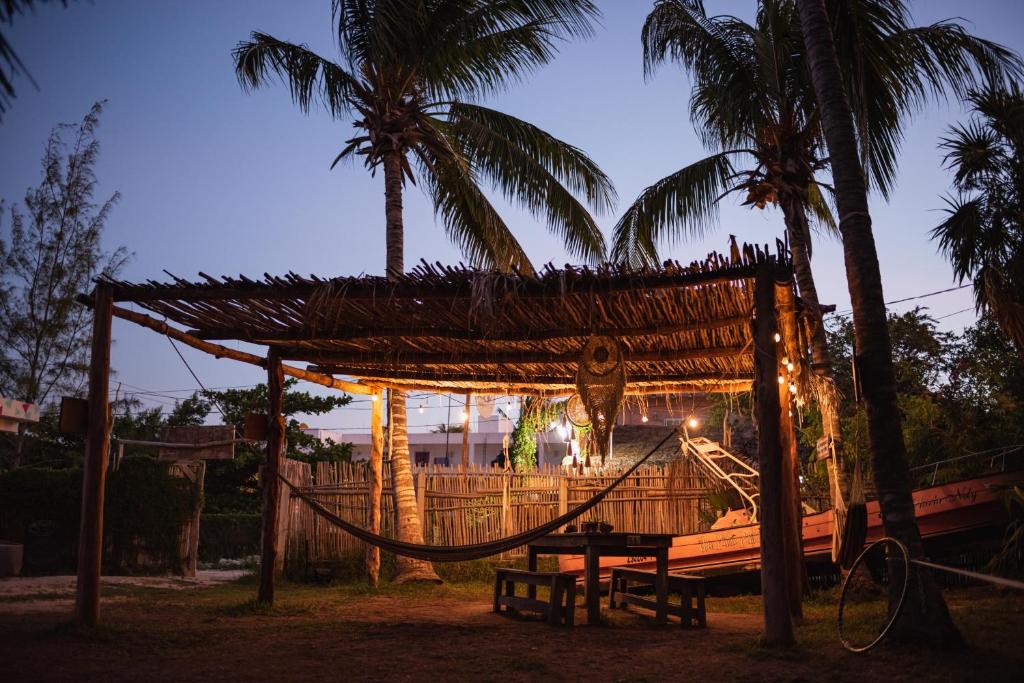 We are not going to deny it; visiting Holbox is not affordable at all, or at least not in appearances. Being an island that over time has gained much relevance, a small place that receives thousands of tourists a year, and high demand, the prices of food and accommodations can be sky high.

And just to give an example, a delicious fish fillet, with rice, beans and french fries can cost you almost 500.00 MXN. It is very expensive, right? But don’t get discouraged. Just like anywhere else, the island has restaurants and hotels that are usually inexpensive.

In the same example: you can enjoy a delicious fish fillet, with rice, beans, potatoes and even a cold beer for less than 150.00 MXN. Surprised, aren’t you? Well, just as there are cheap places to eat, there are cheap hotels in Holbox where to spend the night and now we will list the best ones.

Before starting the list of the best budget Holbox accommodations, it is necessary to mention that in order to get to this paradisiacal island, you have to take a road trip of approximately 1 hour and 30 minutes and then another trip by sea of approximately 30 minutes.

If you want to know the whole process to get to this beautiful island, you can read our article on how to get to Holbox, but if you want to save the reading and also get a 10% discount: Book now your transportation service to Holbox with us.

Generally hotels in Holbox can cost from 800 to 4500 per night. Still too expensive? If you are looking for much cheaper options, the island has several hostels and hotels that offer camping spaces, such as Kin Camping.

This place offers tents that cost approximately 300.00 MXN to 400.00 MXN per night for two people. It should be noted that the place is very picturesque and has common areas for all its guests, such as the kitchen and bathrooms.

Another option similar to the previous one, but with a much larger space is Balam Ecocamping & cabins. Here you can have the option of renting a tent for two people, which costs approximately 400.00 MXN per night.

There are also tents for 3 people, at an average cost of 600.00 MXN and if you want something a little more elegant, romantic and private you can make use of a one bedroom Bungalow at almost 600.00 MXN.

The next option for budget lodging in Holbox at less than 400.00 MXN is the Mapache Hostel & Camping. As its name suggests, the place has shared rooms and also has space for tents.

It is worth mentioning that this accommodation is located 200 meters from the beach and serves a continental or buffet breakfast.

Hotel Los Arcos Holbox is located in front of the main square of the island or, what would be the center of the island. Therefore, if you decide to stay here; you will be surrounded by the emblematic life and atmosphere of the island, where you can even make friends with other travelers visiting Holbox.

The cost per night of their rooms can cost from 1,000 MXN to 1,500.00 MXN, it all depends a lot on the season, but even sometimes they have excellent offers that leave the cost of their rooms up to 700.00 MXN.

Our last option for budget lodging in Holbox is the Golden Paradise Town hotel. The hotel is a two-story, 3-star rated hotel with pleasant rooms for two people, as well as family suites.

The establishment offers air-conditioned rooms with cable TV, minibar and private bathroom with shower. WiFi is available throughout. And the Classic Double Room for two people can cost from 800.00 MXN to 1,000.00 MXN per night.

This list is nowhere near the large amount of budget accommodations on the island, but we can guarantee that between quality, costs and service, these are the ones that stand out the most and of course, recommended for you and now that you know them. Are you ready to get to know #Holbox?