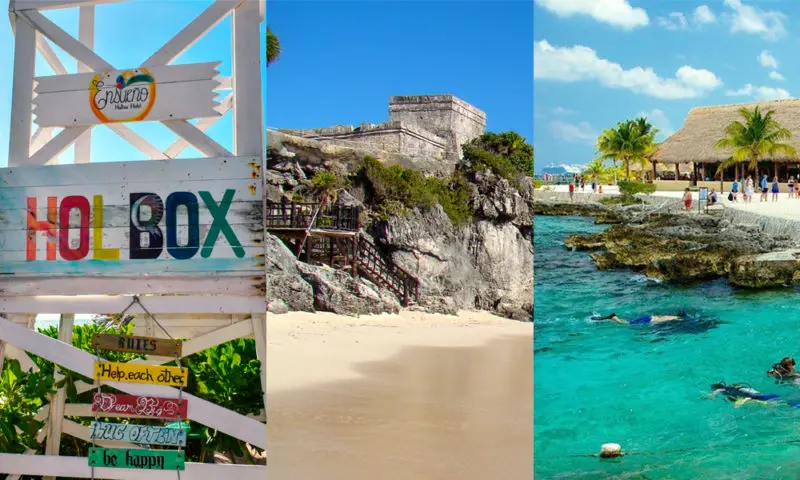 We all know that Quintana Roo is one of the most beautiful states and one of the most important tourist poles in Mexico, and this is largely due to the fact that 3 of the more than 120 Magical Towns in the country are located there.

Each one of these magical towns in Quintana Roo, has a magic that is mixed between the sea, the jungle, the sky and the Caribbean charm of the state.

Bacalar, Tulum and Isla Mujeres have something in common: Both offer destinations surrounded by the most beautiful beaches in Mexico and represent fresh and different alternatives for national and foreign visitors.

But despite having the beaches among their main characteristics, each one of them also has its own charm that has made them winners of the title of magical towns of Quintana Roo.

This award granted by the Ministry of Tourism in collaboration with various government agencies and state and municipal governments, helps to reevaluate this group of towns – as well as 108 more – and its inhabitants, who have managed to keep for all, the cultural and historical wealth they contain.

Because of its beauty, tranquility and beautiful lagoons Bacalar is considered one of more than 120 magic villages. It is a colorful community in which lovers of nature, adventure, history and cultural manifestations find a perfect setting. With a potential for the development of adventure, cultural and historical tourism, it also has the ideal environment for real estate development associated with golf courses, environmental management units and a hotel offer in development.

Between the years 415 and 435 of our era, the Itzaes, who came from the south, built the city of Siyan Ka’an Bakhalal, the current Bacalar. It was the social and economic center of the chiefdom of Uaymil. However, the administrative and political instability of the area made things easier for when the Spanish conquistadors arrived.

Something that defines this recently declared Magic Town is the beauty of its landscape, its famous archaeological zone and its attractive beach, one of the best in the region. It is a very colorful site that has several wild attractions such as cenotes, lagoons and natural areas of great interest for ecotourism fans. In addition, Tulum has several sites for bicycle rides, water fun and other more adventure tourism related sites.

What makes Tulum different is that it was a city built around an astronomical tower, with concave obsidian mirror rooms to project the passage of the sky and rescue the writing of the stars. It was an astronomy school that was even attended by Aztec and Zapotec nobles and other reigning houses during its era of splendor, from the year 900 until the arrival of European conquerors.

Isla Mujeres combines the beauty of the Caribbean, the thickness of the rainforest and the wonderful legacy of the Mayan civilization, a true earthly paradise full of charm.

And if you are wondering how much you can do and see in Isla Mujeres, we would really have to write another post about it, but for now we will tell you about its beaches and the impressive architecture of nature carved in its cliffs.

Isla Mujeres has archaeological vestiges and marine parks with incredible natural reefs. To arrive at Isla Mujeres is to do so in a dream world where every traveler finds his second home.

The oldest news about Isla Mujeres, dates from 564 to 1516 A.D., and names it as a Mayan province of Ekab, that is, one of the four Mayan territories that were part of what currently constitutes the state of Quintana Roo. In those times, Isla Mujeres was not a town, but a sanctuary for the veneration of the goddess Ixchel, patron saint of weaving, the moon, happiness and abundance.

Now that you know which are the magic towns of Quintana Roo, you can’t forget that we have the transportation service to Isla Mujeres, Tulum and Bacalar.